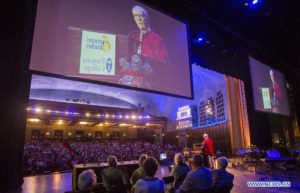 Philip Clayton and Wm. Andrew Schwartz were selected to lead the new initiative—called “Toward Ecological Civilization” (EcoCiv)—the conference sparked. The first EcoCiv event, “Ecology of Community,” was held later in 2015 and co-sponsored by CPS, Pando Populus, and the Environmental Analysis program of Pomona College. During that event, EcoCiv interviewed leading theorists in the field and drafted a roadmap for action.