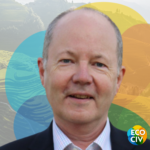 EcoCiv’s president, Philip Clayton talks with James Thornton, who is an environmental lawyer and founding CEO of ClientEarth – Europe’s first public interest environmental law organization. A member of the bars of New York, California and the Supreme Court of the United States, James moved from a Wall Street law practice to found the Citizens’ Enforcement Project at the National Resources Defense Council in New York, where he brought some 80 federal lawsuits against corporations to enforce the Clean Water Act after the Reagan Administration had stopped enforcing the law. He won these cases and embarrassed the government to start enforcing the law again. James then founded ClientEarth in 2007, which now operates globally and uses advocacy, litigation, and research built on solid law and science to address the greatest challenges of our time – including biodiversity loss, climate change, and toxic chemicals. Philip talks with James about the idea of ecological civilization, his activist legal work with Client Earth, and why he remains hopeful about the future.

Check out the book Client Earth by James Thornton and Martin Goodman.